End of an era for Pathways 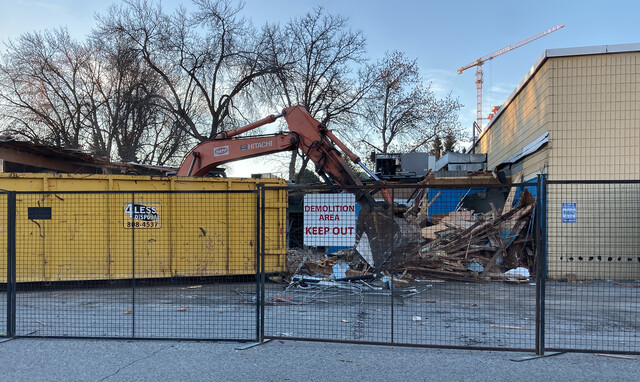 Demolition is underway at a downtown Kelowna landmark of sorts.

Crews are tearing down 555 Fuller Avenue, the former home of the Pathways Abilities Society.

Pathways, which still owns the property, moved its support services to 123 Franklyn Road in Rutland in 2016. The demolition marks a milestone for the society, which began its services at the Fuller Avenue address back in 1953.

Back then the Sunnyvale Centre, as it was known at the time, was the brainchild of a handful of parents, teachers, doctors and other concerned citizens. The group, recognizing that the educational needs of children with disabilities simply weren’t being met in the community, formed Sunnyvale Centre to fill that void.

In its initial year, the centre provided services for 13 students. Over time, as the community grew, so too did the numbers of individuals served by the centre.

By 1973, in an effort to focus on the needs of adults with disabilities, the centre divested itself of its children’s services, ceding those responsibilities to the Neurological Association and School District 23.

In recent years, the Fuller Avenue building has provided activities and support services the community.

“The Fuller Avenue building has been such a foundational part of our society and has provided so many services over the years for individuals in our community with disabilities, it’s hard to see it disappear but it’s all part of ours and the community’s growth.”

Prior to demolition, the building’s most recent tenant was Pathways’ own BikeWays used bicycle shop. The social venture employs individuals with disabilities to refurbish and sell donated, gently used bikes with one hundred percent of the proceeds going back to support Pathways.

In 2017, a year after Pathways services moved from Fuller to Rutland, BikeWays also relocated just a few blocks away to 1216 St. Paul Street.

“We just outgrew the Fuller Avenue building”, explains Bonnie Fraser, Pathways employment manager. “With the tear down of Fuller on the horizon, the timing worked out right for us to move to the new building on St. Paul. It’s allowed us to continue to grow and continue to build our BikeWays venture.”

Demolition and cleanup of the Fuller Avenue building is expected to be completed soon.

“It does feel a little like we’re letting go of some of our history, but at the same time, we’ve evolved so much over the years to adapt to the changing needs of our community,” Daley said. “This demolition is almost like we’re shedding an old cocoon. While it’s sad in one way, it’s also a source of pride for use that this marks a maturation milestone for our society.”

The work goes on for the restoration project. Rear

This error message is only visible to WordPress admins